How to solve Rubik’s cube 3x3x3, instruction for beginners 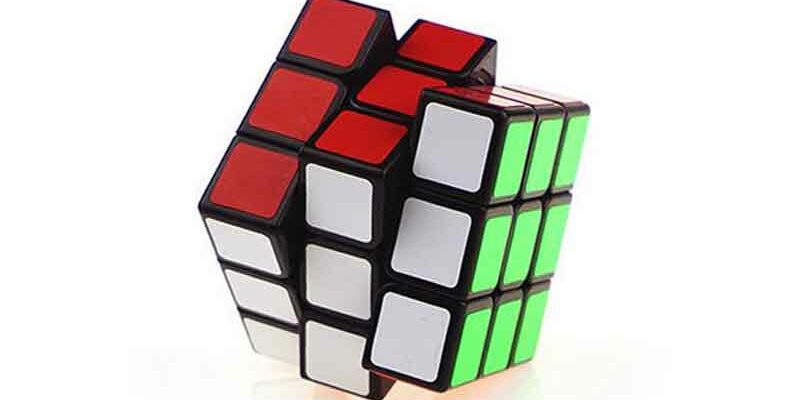 Today there are many interesting puzzles, but none of them has become truly popular, which cannot be said about the world-famous Rubik’s Cube toy. But despite the mega popularity of the cube, for the majority it remained unapproachable. In this article, I will tell you the easiest way to solve the 3x3x3 magic cube, giving you step-by-step instructions on how to solve this exciting problem.

Before starting to solve the cube, read the abbreviation of the formulas.

Now let’s proceed directly to the assembly of the cube.

First, we need to choose the side on which we will collect the first cross. That is, you need to choose any of the six sides from which the assembly will begin. For this tutorial, I chose white.

Now we have a white square in the center, and around it we need to place four white edges.

The first stage is the easiest, and we don’t need formulas to assemble the white cross, just use your logic. But if you are at a loss, then below are attached gifs with situations that you may have.

To collect the white layer, we need to set the corners in place (on the white edge). For this we need a combination – Beer pav.
-B1, -E1, B1, E1 – the combination itself.

First, take any side on which we will insert a white corner, I chose the orange side, it is adjacent to the green side. Next, we find the white corner, which contains the two colors we need (green and orange). And we move this angle so that it is between the two centers at the bottom of the cube, as shown in figure (1).

Next, we make a combination of pav beers -B1, -E1, B1, E1. Using this scheme, we do the same with the rest of the white corners.

To insert the edge of the second belt, we need to turn the cube white side down and find the desired edge on the opposite yellow side. For example, I found an edge with a green-orange color, then turned the top face until the green color of the face matched the green side, as shown in figure (2).

Now the orange-green edge can be swapped with the orange-blue edge, which is on the second belt, for this you need to perform a combination: D1, B1, -D1, -B1, A1, -B1, -A1, B1. This combination will replace the edge on the right side with the edge that we prepared on the upper edge, while holding the cube with the green side facing you, as shown in the animation below. It so happens that the edge needs to be replaced on the left side, for this a mirror combination is performed: -D1, -C1, D1, C1, -A1, C1, A1, -C1.

It may also be that the required edge is already in the second belt, but not in its place. To do this, you will have to replace it with any other edge that you can take on the top face of the cube by doing the same combination with the other edge.

After you have found and replaced all the ribs of the second belt, you can proceed to the next step.

Now that the yellow cross is assembled, rotate the top layer with the cross in order to look for the coincidence of the edges of the cross with the centers of the four adjacent sides. If all four colors of the edges of the top face coincide with the four centers of the sides, then you are in luck and skip the fifth stage of the assembly and go to the sixth. If there are no matches, then go to the fifth stage.

Consider the first situation, when two faces of the cross coincided in color with opposite sides, in which case we take the cube in our hands so that the yellow cross looks up, while one of the coincident faces looks to the left, and the second to the right. We use this combination: B1, D1, -B1, D1, B1, D2, -B1, D1. As a result, we get the second situation when the edges of the cross coincide with two adjacent sides.

Stage 6 – Arrangement of the corners of the 2nd cross

Now we are faced with the task of putting all four corners in their places, for example, the “red-yellow-green” corner should be where the three sides of the cube intersect – red, yellow and green, and no matter what colors it will be rotated to these sides, the main thing is that it is there (Figure 6).

After that, you will have at least one match. Next, we take the cube in our hands so that the coinciding corner is to your right on the front and top faces, and we do the same combination of mixing the corners D1, B1, -D1, -C1, D1, -B1, -D1, C1.

Checking the corners. If the rest of the corners still do not fall into place, we repeat the same combination, after 1-2 repetitions the corners will take the desired position.

Stage 7 – Flip the corners of the 2nd cross

Now that all the corners are in place, some or all of them may be in a deployed position. To fix this, you need to apply the following combination, which will deploy them to the correct position.

Take the cube so that the yellow cross is at the top, and the corner to be flipped is on the front side to your right (Figure 7) and apply the Beer Pav formula (-B1, E1, B1, -E1) several times until the corner is correct position, this can last 2 to 4 repetitions of “Beer Pav”.

Then, we turn the top face in any direction to the next incorrectly turned corner, so that it also appears on the front side to your right. And again we do the same “pip pav” formula. And so we do it with other irregular angles (it is important to rotate only the top face when changing the angle, and not the whole cube).

Congratulations, the cube is complete!